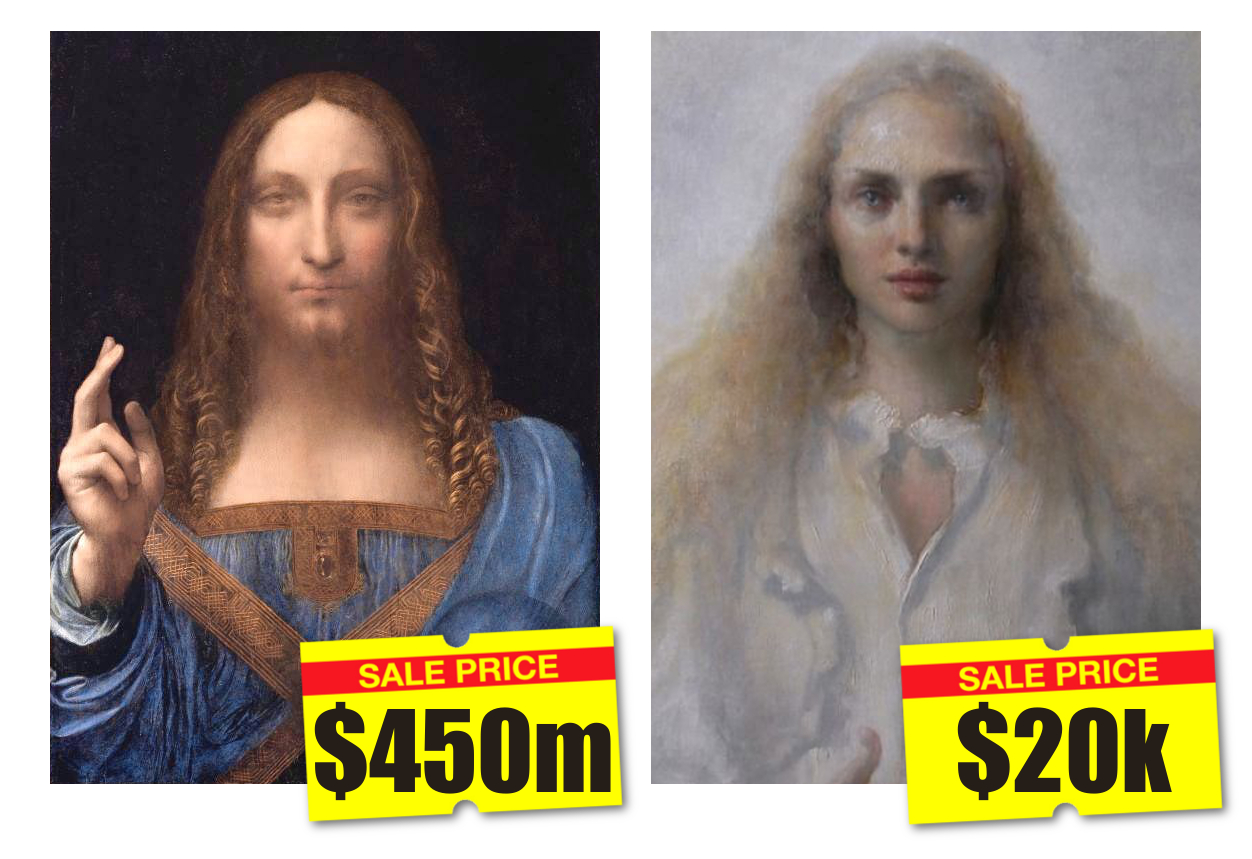 While the art world went coocoobeans over DaVinci’s $450m painting sale, current renaissance painters are selling for under $20k a painting.

In case you’ve been living under a rock, Salvator Mundi, what Christie’s billed as, “the last DaVinci,” recently sold for a record-breaking $450 million dollars.

If Leonardo was painting today his work would sell for under 20k and he would be smugly ignored by the art world because his work wouldn’t be considered, “serious.”

I know this because I’ve spent the last couple of years interviewing our current renaissance painters. They take years learning the craft – painting and drawing like the old masters – yet most of them wouldn’t sell a painting the same size as Salvator Mundi for more than twenty thousand dollars.

I’m not saying they have the genius of DaVinci, history will decide that but what stands out is the huge difference in price. This comes, in part, from the way our current renaissance artists are viewed by the broader art world. It’s folksy at best, like fashionistas talking about the inhabitants of one of those heritage villages where people dress up in old costumes and make butter and such.

“They are in a conversation with the past,” is the usual brush off.

When the Romans were copying the bejesus out of the Greeks they were in a conversation with the past. So too were Napoleonic painters when they were obsessed with all things ancient Egypt. There are many similar examples in the history of art, so nothing new there.

Of course, all this hip prejudice started with that French, scallywag Marcel Duchamp. His innovation was to say let’s have something going on that’s more than just pleasing to the eye, let’s get the brain involved here, let’s get some ideas going.

This was a brilliant innovation and led to all the great conceptual art we have now. There would be no Jeff Koons or Damien Hirst without Duchamp.

The other old chestnut that gets trotted out is, “they’re just not part of the current conversation.” That doesn’t hold water either, especially in the last couple of months because the whole art world has been talking about nothing else but a painting in the style of the old masters.

So what’s going on?

This is Interesting when you consider Salvator Mundi wasn’t sold in the Old Masters auction at Christie’s. Instead, it was sold in the Post-War and Contemporary Art Sale alongside a Jean-Michel Basquiat and an Andy Warhol, an approach which London art dealer Philip Mould called, “inspired.”

Arts editor for BBC, Will Gompertz, described the Salvator Mundi sale as a “masterclass in the art of selling art.”

But there’s more going on here than Andy Warhol‘s quip about good business being the best art.

In among his tirades about the Salvator Mundi sale – mostly that the painting is a fake – New York art critic Jerry Saltz, highlighted what he called a new system of authority in the art world where auction houses now have the power to direct the market.

This is encouraging for our new renaissance artists in light of Christie’s explanation for their inclusion of Salvator Mundi in the Post-War and Contemporary Art Sale. Loic Gouzer, their Post-War and Contemporary Art chairman described it like this, “The work of Leonardo is just as influential to the art that is being created today as it was in the 15th and 16th centuries.”

This is a good sign. It means that the art world has noticed the baby on the floor. The one that was thrown out with Duchamp’s bath water. It indicates a growing awareness that art that is pleasing to the eye has its place in the broader art world and has always been part of the conversation. It’s a sign that the time is coming when some new old masters will start setting auction house records.

Left-hand image: Salvator Mundi by Leonardo Davinci. Right-hand image: Messenger in White by Maria Kreyn.
(You can hear my podcast with Maria here.)