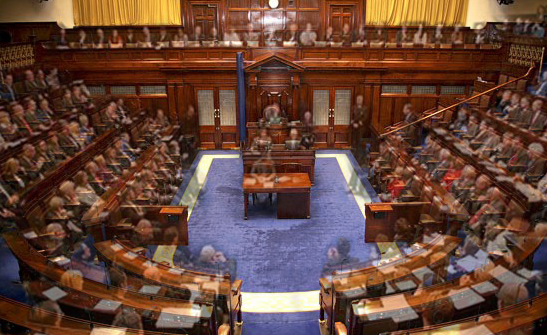 If I can handle my banking online why can’t I run my country online? If it was run up the flagpole in a pub, or some other social forum where everyone treats there opinion like a flaccid muscle that needs a good workout, the consensus would be that it would never get off the ground.
“They’ll never be able to make it secure.”
“It’ll be infested with swarms of hackers emptying bank accounts with the click of a mouse.”

But, surprise, surprise, they got it to work. And more than that they managed to convince everyone it was safe to use. Even people who are normally computer averse will still use online banking. My eighty-two year old mother being a case in point; she does all her banking online.

So my thinking ran like this, if they can get online banking to work, something that involves people’s money, then surely it would be possible to give everyone in the country an online citizen account. With our online citizen account we could log into it the same way we log into our online bank account, but instead of moving our money around we could vote, daily if necessary. The results could be tabulated almost instantly and policy could be changed accordingly.

Once we get this system set up we wouldn’t need politicians anymore. Not that I have anything against politicians as such, they just seem obsolete. I can see why they exist historically, back then I might have needed somebody to represent me in government because I was either too uneducated, or too busy surviving to stay informed about upcoming law or policies, but not now. Now the opposite is true. Most of the problems in Ireland, and the world in general, are made worse by our system of representation.

Old School
As things stand we get an opportunity to vote for our representatives once every four years, or whatever it is in your country, then we give them the power to make decisions on our behalf – we allow them to represent us.
And then we’re stuck with them. We sit outside the walls of government hoping they make the right choices, or at least the choices we would make, and generally feel disempowered and removed from the decision making process.

The politicians, for their part, have to twist themselves into knots trying to please all of the people all of the time, particularly in the lead up to an election, then once in office have to put up with us complaining about everything they do. Sure it’s no wonder they need drivers and private jets.
No, hang on. . .

We relate to our politicians as if they were celebrities, which they are not, they are public servants. They have put their hand up and said, “Okay, I’ll run the country if you want me to.” Then we give them all this power and expect them not to be changed or affected by it.

Implementation
I think the software that runs the online system would need to be open source meaning no company or individual should own or control it. Making the system open source would skip over a lot of the security issues because if the code for the system is open to everyone then ironically the chances of somebody hacking it are less. It would also make the system nimble and responsive, two words not currently associated with our political system.

If the online system is open source then the focus can be on providing integarty to the end user, you and me. If it is operated like any other open source system there would be an army of motivated savy programmers improving the system and also monitoring it to make sure no one was gaming the system or making it biased.

It should also be possible to build a feedback loop into the voting process so that when you cast your vote, the system would send you back a confirmation that your vote has been received into the system and will go into their overall tally for whatever issue it is that you’re voting on.

Policy?
An online voting system is great but how will we decide what we vote about? Who will shape policy?

“If you can’t explain it simply, you don’t understand it well enough.”

Most policy I have read, and that’s not a lot, is written in very convoluted language. It’s almost as if it is written in a way that will intentionally make the meaning and intent of the policy unclear. Often in the run up to a referendum a booklet will arrive in the mail “explaining” the changes to the constitution. This all seems like a load of obfuscation, which is to say bullshit, to me.

Here’s how we would formulate or change policy with direct governance. If there is something you want introduced or changed, whether it is a new network of bicycle tracks, yes please, or a change to the abortion laws, you can instigate a policy change through the online system. Like a wikipedia entry, your policy can be modified and refined as more people become aware of, interested in, and involved in the process until a critical mass of interest is reached. A critical mass of interest would be a threshold percentage of the population. For example, if 50% of the population think your policy is worth bringing to a vote. Once your policy had reached this threshold it would go on to the next stage where we vote on implementing the change.

If your policy doesn’t reach the critical mass threshold then it doesn’t get voted on. Not everyone may be as passionate about the rights of garden gnomes as you are.

Once the policy is approved by a majority vote it would be implemented by the army of civil servants already in place.

I’m not naive enough to think that Enda Kenny, Ireland’s current prime minister, is going to call me in the morning and say, “God, that’s a great idea John, lets switch to direct governance right now and I can go on a holiday.”

I think a reasonable model for how it could be introduced is if the online system was set up and run in tandem with the existing system. Once enough people had registered their online citizen accounts I think our existing politicians would quickly see that the online voting system was a much more accurate barometer of what people actually wanted rather than the polls that are currently taken throughout the term of a government.

Speed of response
I think it would also become obvious very quickly that the immediate response of the the online voting system was highlighting the huge difference between what goes on in government and what goes on in the street.

I could see that by the time the next general election came around a host of new independent representatives would emerge with the single agenda of handing representation back to the people through direct governance.

Short distance vision
The distance this idea has to travel is not far. It’s not like when Martin Luther King made his dream speech in 1967 where the distance between where he was and the vision for the future he described was so vast. What I’m suggesting could happen very quickly if we all wanted it to.

Action
If you have read this far and you think this is an idea that could provide a solution to some of the problems in Ireland, or the world, then share this idea far and wide. Tell your friends. Use it at dinner parties. Take credit for it if you like, I don’t mind, I’d just like to see it happen. Particularly share it with any software engineers or hackers you know that could make it happen.

I’ve just outlined the broad strokes as I see them, add your voice to refining the idea in the comments section below.