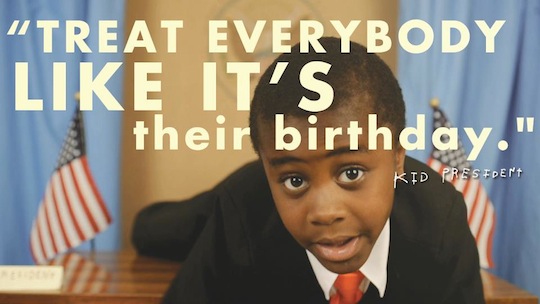 1. My approval is not required. My neighbour knocked on my door a couple of years back and said she wanted to get married. I was about to offer my congratulations when she stopped me and said she wanted my approval first.
I thought this was a bit odd considering I didn’t really know her that well. I told her that she didn’t need my approval as it wasn’t any of my business who she married.
Looking at the ground she went on awkwardly to say that when she and her prospective husband got married they might want to have children and would that be okay with me too?
Say what now?
Before I could respond she had dragged a young man to the front step and introduced him as the love of her life.  She told me how well balanced he was and what a great father he would make. She said they really loved each other and that it would mean the world to them if I would give my approval for them to get married.
I, kind of snapped, “Marry whoever you want!” I said, “It’s none of my business. I don’t have any right to comment one way or the other!”
“Actually you do,” she said and showed me a letter from the government stating that whether she could get married or not was in fact legally up to me.
“I can’t believe it,” I said, “Who dreams up this shit? What has something so personal as your love life got to do with me? It’s obscene that you’re being forced to come and get my approval.”
“I agree,” she said, “but if you don’t officially give us your approval we can’t get married.”

Okay the above didn’t happen a couple of years ago, it’s happening in May here in Ireland, and my neighbour needs my approval to marry a woman not a man, but other than that there’s no difference between what I just described and the upcoming referendum. Did you know that last year approximately 4,500 Irish laws were repealed? I didn’t. The reason we didn’t have a referendum about it was because it was patently obvious that these laws were out of date, that we no longer thought reserving oatmeal and potatoes for consumption by the, “lower orders of people,” was a good thing, or that the first Wednesday of every month should be a day of fasting and humiliation on account of the bubonic plague in London, to name two of the repealed laws.

Of the ten other countries in the EU that updated their laws to embrace marriage equality, none of them had a referendum. Having a referendum about marriage equality gives the issue a kind of weight that it shouldn’t really have and encourages us to feel like our opinion on marriage equality is needed because, well, we’ve been asked for it, but as I outlined above just because my neighbour had to ask for my approval didn’t make it right.

3. More than marriage, Love is the cornerstone of the family.

Because of the referendum, that we don’t need, there is currently a lot of talk about marriage and what it means and that’s great. It’s good to look again at something that is part of the furniture. The constitutional phrase at the centre of the discussion is that, “marriage is the cornerstone of the family,” which is true but not the full story. As I see it, LOVE is the cornerstone of the family. We all know married couples that no longer love each other and while marriage may keep them tied together the lack of love has an adverse effect on the family.

4. The constitution is an evolving document. The constitution is being referred to as if it was written by supreme beings who knew better than we do now and if we don’t heed their wise words about marriage being the cornerstone of the family, the wheels will fall of society and it won’t be long before there is human sacrifice, dogs and cats living together, and mass hysteria!

The constitution was first drafted in 1922, by people.  All the constitutional talk is put in sharp focus when you consider that homosexuality wasn’t decriminalised in Ireland until 1993!

For me the intervening 71 years trumps anything in the constitution and is an indication that the constitution is a document of its time and needs to be updated to reflect how our society has evolved. If marriage was actually the cornerstone of the family then the house would be a bit shaky. (The house being the family, with the weakened cornerstone that is marriage, look I didn’t make up the analogy.) Divorce is a relative new thing here in Ireland, only 20 years old, so our divorce rate of 10% is understandably low, but in America which has had divorce for yonks, the divorce rate is at 50%, so it seems like heterosexual people are doing a good job of eroding the sanctity of marriage all on our own. Marriage equality will decrease the divorce rate, in the short term anyway, because if you have to fight for something you appreciate it more and are less likely to let it go when the going gets rough.

6. The children will thank me. With the introduction of marriage equality adoption agencies will no longer be able to give preference to heterosexual couples. This seems obvious to me because that’s what equality is about isn’t it? Not a partial equality or a token equality but, you know, equality.

For some people this is a bridge too far. The thinking goes something like, “I’m all for gay marriage but, come on, this is babies we’re talking about.” The cornerstone of the family will get dragged out again but what is really being said is heterosexuality is the conner stone of the family. The inference being that babies raised by same sex parents will in someway be influenced by the weirdness of their same sex parents to be, at best, less than normal, and at worst, gay!!!
Studies may be cited showing that adopted children raised by same sex parents don’t do as well as children raised be heterosexual couples, but there are just as many studies showing the opposite and I don’t trust studies anyway. They are too easily corrupted. Just remember all the studies, by Doctors, showing that smoking was good for your health.

I think the adoption issue just highlights a toleration mentality and a general lack of genuine acceptance of difference. That line of thinking doesn’t bear much scrutiny anyway because if it was true that the sexual orientation of your parents influenced you then everyone would be heterosexual. Wouldn’t we?

Any parents of adopted children I know are super devoted to their kids because they have consciously chosen to have their children.

7. I’m making sure I am on the right side of history. Humanity is evolving and as it does old segregations, prejudices and inequalities dissolve. Marriage equality is part of that evolution. In thirty years if I am asked how I voted in the marriage equality referendum of 2015 I know I will be glad I voted in sync with the movement of evolution.

8. It is a human rights issue. If two people fall in love, the social progression in our society, and in most cultures, is for them to get married. If a heterosexual couple were legally stopped from getting married for any reason there would be an outcry, and that would be right because it is a basic human right to marry whoever you want. As it stands in Ireland if you happen to fall in love with someone of the same sex as yourself you can’t get married. That makes marriage equality a human rights issue.

9. It’s what Jesus would want. The door is to the house of the family with the cornerstone. . .  let’s just say he would definitely be down with this.

10. It is a show of support to anyone who was bullied. It’s a sad fact, but if you know any gay or lesbian people they have been bullied. They may not tell you about it, but it has happened. I’d like to think that if I witnessed bullying I would do something to stop it. I can’t do anything about the bullying that has happened and I can’t do anything about bullying I don’t witness but I can show my support for people who have been bullied. “These people who are making a big deal about gay marriage? I don’t give a fuck about who wants to get married to anybody else! We’re making a big deal out of things we shouldn’t be making a deal out of. They go on and on with all this bullshit about “sanctity”—don’t give me that sanctity crap! Just give everybody the chance to have the life they want.” – Clint Eastwood.

I’m voting in favour of marriage equality because I don’t want Clint to think I’m one of “these” people. I know he’s getting on a bit but I’m pretty sure he could still mess my shit up, and if I don’t vote for marriage equality it may not happen. It’s hard not to get sucked into the media driven message that there is a lot of bad shit happening in the world and that I can’t do anything about it. It’s easy to feel powerless. Marriage equality is something I can do something about, so I’m doing it. A 21 year old president is something I would like to see. What? The referendum isn’t all about marriage equality you know. There is another vitally important question this unnecessary referendum was called for; should we lower the age of presidential candidates from 45 to 21?
Bring it on, I’m hoping for someone who is a mix of Mary Robinson and Lady Gaga.
That would be brilliant.